How do plants track the sun?

The secrets of sunflowers, Heliotropism. Heliotropism is the movement of a plant with the season, or even throughout the day, in response to the direction and movements of the sun. Imagine a sunbather desperate for that beach-body tan, rotating the sun lounger throughout the day. But now imagine that instead of simply getting a tan, […] 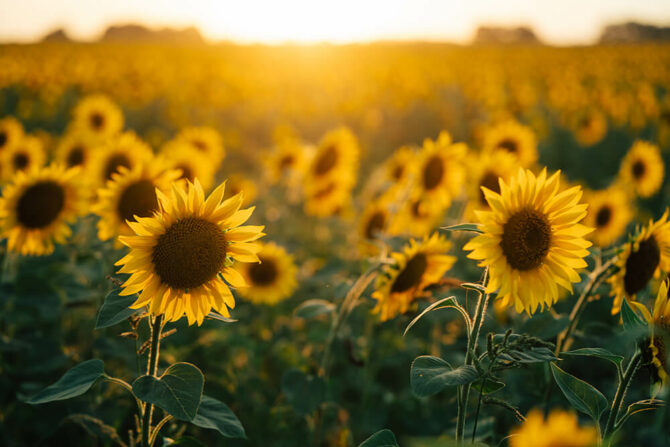 The secrets of sunflowers, Heliotropism.

Heliotropism is the movement of a plant with the season, or even throughout the day, in response to the direction and movements of the sun. Imagine a sunbather desperate for that beach-body tan, rotating the sun lounger throughout the day. But now imagine that instead of simply getting a tan, your body receives its fundamental nourishment from maximising on this full solar exposure. For plants, as the sun is their food, their primary energy source, heliotropism can be vital for survival.

Of course, plants are sessile individuals, they cannot move from their fixed position in the earth, out of the shade and into the sun, or vice versa, depending on their needs. This means that they purely must rely on either their growth, or on subtle movements of individual plant organs, to obtain the amount of sunlight they require.

When plants use their growth to manoeuvre themselves in response to the sun, for example, around the shade of other plants, this is known as growth-mediated heliotropism. This generally involves gradual movements over time that result in an irreversible change in the plant in the form of growth.

The other option plants have is to orientate their leaves or flowers towards the sun, whenever they can get it. This may manifest as subtle movements throughout the day, and these movements are usually reversible. Such movements are driven by changes in turgor pressure created by motor cells in special plant organs called the pulvinus, or in other supporting structures such as the stem. This means that by transporting ions and water between different plant cells, to “inflate” certain cells, the plant can change the angles of different plant organs. This allows for much more rapid changes in plant posture than growth-meditated heliotropism.

Sunlight is the driving force for photosynthesis, the process by which plants create sugars and oxygen for life itself. So, it makes sense for plants to orientate their leaves, which are packed full of green chloroplasts, the hubs of photosynthesis, towards the golden orb. Meanwhile, in some cases, plants must face their leaves away from the sun to prevent excessive water loss, overheating and sun damage, known as photooxidative stress, to their most important photosynthetic machinery.

When plants orientate their leaves perpendicularly to the sun’s rays, to maximise light absorption, this is called diaheliotropism. Examples of diaheliotropic plants are cotton (Gossypium hirsutum) and soybean (Glycine max)(1)(2). However, soybean plants also exhibit paraheliotropism, which is when the leaves are oriented parallel to the sun’s rays, to reduce sun capture. This would usually occur at midday when the sun intensity is at its peak.

However, optimising photosynthetic efficiency is not the only reason for heliotropism. Some plants perform floral heliotropism. Flowers typically do not contain many or any chloroplasts for the conversion of light energy via photosynthesis. Therefore, there must be another reason for such floral tracking of the sun.

Sunflowers (Helianthus annuus)(3) are often seen as the poster child of floral heliotropism. However, it is actually only the young sunflower plants that move in time with the sun(4). Before the flowers have opened, the young plants lean westward as the day progresses but reorient to the east each night, in preparation to meet the rising sun in the morning. As the plants age, the stem becomes more rigid, and the sunflowers open permanently orientated to the east. Scientists found that eastward facing flowers warmed up quicker than (artificially fixed) westward facing flowers, which gives a clue to the reason for floral heliotropism.

It has been shown that the higher flower temperatures found in plants that perform floral heliotropism attract bees and other pollinators, and increase the rate of pollen germination. These are all essential processes for plant reproduction.

Other floral heliotropes include the scarlet pimpernel (Anagallis arvensis), which is also known as the “poor man’s weather glass” or “shepherds’ clock.” The scarlet pimpernel is a small red (or sometimes orange or blue) flower that is commonly found in gardens and woodland areas worldwide. The flowers will be seen to be open in the day, but shut at night and in cloudy weather.

The amazing thing about some of these plant responses to the sun, is that, if you move the plants to a place without sunlight (such as a laboratory), the plants often continue displaying the sun-tracking movements for several days or longer. The molecular basis of this vital and predictive plant programming is known as the “Circadian clock.”

The Circadian clock(5) is an internal 24-hour cycle made up of molecular pathways that acts as a timekeeper in both plants and animals. The clock enables the plant to anticipate regular changes in the environment (such as temperature and light) that happen on a daily basis, so that the plant can optimise its fitness and development. For example, one hour before the sun rises, a plant will already know to activate its genes involved in photosynthesis, so that its ready to make the most of the sun when it arrives.

The important thing about the Circadian clock is that is “listens to” information and takes input from the environment so that the plant can also adapt when the changes become less regular, such as when days get longer in summer, or when a plant is physically moved by a human into a new environment. Scientists(6) have suggested that this adaptability that the clock provides may be a critical weapon needed by plants if they are to survive the consequences of climate change, which include changes in temperature, sunlight and CO2 concentrations.

3. The Heliotropism of a Sunflower (sfgate.com)

Losing your sense of smell, known as anosmia, is a phenomenon that, whilst previously rarely discussed, has come under the spotlight since the arrival of the Covid-19 pandemic. Anosmia can refer to either the partial or full loss of a person’s sense of smell, and this can be permanent or temporary. There are many causes […]

What do you give the man that asks for nothing or says that they don’t need anything for Father’s Day? I’m sure we all want the father figures in our lives to be as happy and as healthy as possible and providing them with a gift that helps them to take care of their health […]

Located in the heart of Kensington, Queens Health has been a long-standing establishment catering for the health and beauty of the community. Queen’s Health Shop understands wellbeing journeys, whether at their beginning, middle or even end is not always easy, and are on hand to help you be the best you can possibly be. With experienced […]