Juniperus communis, or common juniper, is a slow-growing small coniferous tree or shrub, with green or blue-green needles that appear in whorls of three. You will know this plant as the culprit behind one of our very favourite tipples – gin. Common juniper is quite a unique type of plant in that there are separate […] 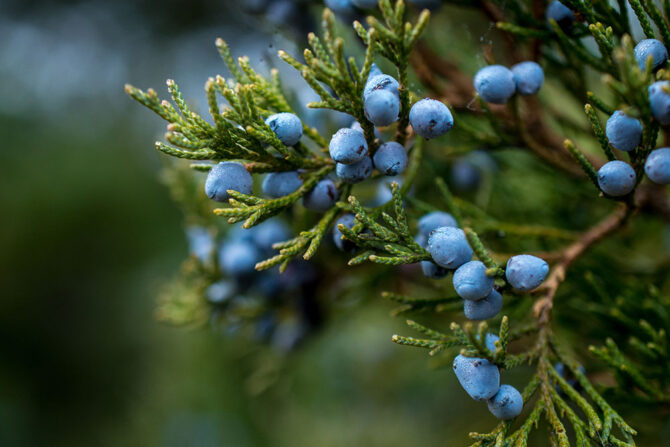 Juniperus communis, or common juniper, is a slow-growing small coniferous tree or shrub, with green or blue-green needles that appear in whorls of three. You will know this plant as the culprit behind one of our very favourite tipples – gin.

Common juniper is quite a unique type of plant in that there are separate male and female plants. Only about 5% of plant species have fully separate sexes, with most plants being hermaphrodites(1). The male juniper plants have tiny, yellow cones that shed pollen, while the female plants have berry-like seed cones that, when mature, become fleshy and purple-black.

These female berry-like seed cones are not only responsible for gin, but also for juniper berry essential oil, which is obtained via steam-distillation of the crushed and partly dried ripe berries. Juniper berry essential oil is used to provide fragrance to soaps, lotions and perfumes, and to support health with its antiseptic and astringent properties.

Common juniper is the most widely distributed woody plant on the planet(2). As well as its wide geographical range, it is also distributed across a great diversity of habitats, from highlands to sand dunes. Despite this, common juniper is locally threatened by changing land use patterns in many places, especially in parts of the UK.

The Lizard juniper, which is a subspecies of common juniper, Juniperus communis ssp. hemisphaerica, is only found on the Lizard Peninsula here in Cornwall. The Lizard Peninsula is the most southerly point of the British mainland and is designated as an Area of Outstanding Natural beauty. The Lizard is famous for its steep serpentine cliffs and stunning cosy coves.

In 2010, the Lizard juniper had become one of the rarest plants in the UK, with the population reduced to around only 13 individual plants. The low-lying juniper bushes had suffered from scrub and gorse fires, and highland cattle, which were introduced to control the scrub, unfortunately took rather a fancy to the rare, and clearly delicious, shrubs(3).

Luckily, conservationists from the Eden Project and Natural England came to the juniper’s rescue, creating a plan for their revival. They took cuttings and berries from the Lizard plants with the aim of growing clones and progeny of the junipers, which were reared in the Eden Project nursery. Since then, around 200 of these Eden-grown junipers have been planted in a secret location on the peninsula near the existing wild population to establish a new colony. Meanwhile, additional individuals are being introduced at other wild locations in case anything disastrous happens to the isolated community of the Lizard’s Gew Graze.

This revival project is not only important for conserving this one rare population of plants, but also for understanding what methods are best for protecting our native habitats and plants. The result of this project will lend a hand in the safeguarding of other threatened plant species.

So, for the sake of our native British flora, long live the Lizard juniper.

Losing your sense of smell, known as anosmia, is a phenomenon that, whilst previously rarely discussed, has come under the spotlight since the arrival of the Covid-19 pandemic. Anosmia can refer to either the partial or full loss of a person’s sense of smell, and this can be permanent or temporary. There are many causes […]

Welcoming Nature Into The Festive Home

What are the health benefits of a real Christmas tree? Gathering evergreen trees from the forest to celebrate the winter season is an ancient practice we still enjoy today. However, more than a tradition, bringing these trees into our homes offers a wealth of health benefits which we are probably unaware of, helping to support […]

With more students than ever before disclosing issues with their mental health at university, let’s take a look at how we can spot symptoms within ourselves and those around us. As the university academic year begins, thousands of freshly turned 18-year-olds pack up their bags and fly the nest. This is a momentous time for […]

Marjoram, also known as Sweet Marjoram, is an aromatic herb, and is a member of the mint family. The flower itself is rather small and unusual looking, and it sometimes forms in spikey clusters. The whole plant is very aromatic, with the leaves often used in cooking due to their spicy, potent flavour. When sweet marjoram […]